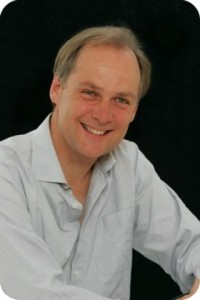 Gavin was born in Germany and schooled in France, England and Scotland. After studying law in Edinburgh he spent 30 years working in the finance industry. During this time he was based in London, New York, Chicago (where he lived for 12 years) and Edinburgh.

In 2003 he left the financial world and moved to a farm in Scotland where he now combines farming with writing in the next phase of his career. His first published book was The Global Investor (Probus/McGraw Hill 1994), an investment textbook. This was followed in quick succession by four volumes of fiction short stories, The Geordie Kinloch Quartet (Librario 2005-2012), which capture vignettes in the colourful life of a young Scot as he travels and works around the world. In writing his stories the author was inspired by the many people he’d met and places he had visited, but is emphatic that they are fiction.

In 2011 his first novel, The Price of Redemption (Librario), was published to much acclaim. While resolutely fictional, it draws extensively from the author’s observations of the US and UK asset management industry from the 1980s to the early 2000s. One reviewer asked the question, “Is this the next cult novel of the City and Wall Street?” In the company of Liar’s Poker, The Great Gatsby and Bonfire of the Vanities, The Price of Redemption has been in the upper reaches of Goodreads’ rankings of financial fiction since it was published in 2011.

In collaboration with the famous illustrator Bonnie Kinloch, he wrote two books for children which have proved popular in the 3 to 9 age group. Not So Faraway Tales and Monkey Tales & Sticky Sparrows each comprise of three delightfully-illustrated crazy stories about animals, dancing bananas and warring vegetables. At book sales they regularly draw the observation that “they’re not like any other children’s books”—and as a result are much in demand.

Gavin has also written a private memoir of his accomplished aunt, Jaunts with Jack, and a quirky catalogue of the art collection in a Scottish country house collection.

He has many projects in the pipeline, including a novel based on the opening months of the First World War, a sequel to Price of Redemption and more children’s stories.